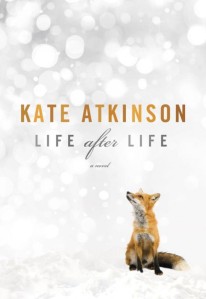 Life After Life is a very well thought out and constructed novel. It questions the theory that if one could change certain aspects in their life would it alter the future for the better or worse. With this in mind it follows the life of Ursula from birth to death testing the different paths she could follow and their consequences. With a World War One and World War Two background it is an interesting read as Ursula becomes involved in World War Two from the British side in one part of the book which is closely followed by the author rewriting Ursula from the German side of the War.

Considering this, I found that this meant there was no defining plot to the book as it continued to alter as the author returned to certain areas of Ursula’s life and changed one of her decisions or actions which had a consequential effect to Ursula’s future. At the same time, I found it difficult in some parts because as a reader you were returning to a part of the story you had read and it was difficult to see development in the plot or growth in the character. However the underlying idea is interesting as when I was reading the novel I kept returning to events in my life and wondering where I would be today if that one particular thing did or didn’t happen.

I found the chapters on World War Two in Germany and England fascinating because I was born years after the wars had ended and could only learn about them from history. The portrayal of the war in Life After Life was gripping as it possessed realistic elements that made me imagine the conflict in a horrific but truthful way. Today when we learn about the First and Second World War, there are great misunderstandings as to the horror and destruction that actually took place but I felt this book really captured the reality of it in both Germany and Britain.

Whilst I enjoyed aspects of the book I feel that for me it was a 3 out of 5 stars on goodreads as I found it difficult to read in some places with the continuous looping in the story. I found it hard to concentrate with a lack of consecutive development compared to the structure this novel took which for me felt more like a combination of short stories rather that one large plot. I won’t deny that this novel is definitely an individual piece of work and craftsmanship as it strives to do something unknown to the literary world. Saying this I appreciate the complexity of the novel and would recommend it, however it isn’t a book I would read again as maybe it was just too difficult for my tastes.