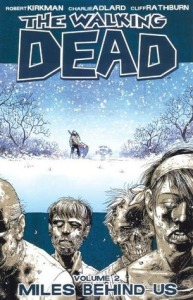 I can’t deny that I have fallen in love with this graphic novel series; it just keeps getting better and better. The first volume was very much about setting the scene, introducing the characters and now in this book it is starting the get interesting. Just a warning that some of what I have mentioned below could ruin the TV series or the plot so read with caution, I try to skirt around the main action.

As Rick and the others realise that this is now their life they try and find a place to call home. Stumbling across a housing development they see a life for themselves, having a house each and place to make theirs but as before things don’t go as expected and they have to leave. They are hungry, running low on supplies and getting scared of what could be ahead. They make friends with a man called Herschel and seek refuge at his farm. Anyone that follows the TV series will know how this ends but as I don’t watch the TV series, I was surprised.

This volume was so good with new characters, new drama and new knowledge of what the zombies are capable of. I really liked the parts at Herschel’s farm as it gave a new perspective of what the character’s think of what’s happening. He looked at the zombies in a different way and as he owns a farm, he had a responsibility to stay where he is and care for his family. I felt that is gave a new perspective to the plot as he was unlike the group and couldn’t just leave or run from the danger.

As the group become aware of what life is really like now and that they need to find food, shelter and water they begin to become scared and tense. The entire plot becomes intense from here on in and exciting. I really enjoy that with this graphic novel that the plot is right in front of you and not only are you reading the dialogue between the characters but that you can see their expressions. I’m also grateful that it’s in black and white as some parts are gory and I doubt I’d appreciate it as much in colour, it might be a bit too much for me. I’m not a fan of gore and I think that’s a reason I haven’t watched the TV series yet. Not to mention that some of the characters in the graphic novel don’t show in the TV series and from what my friends tell me each Volume seems to coincide with a Television series.

I am really enjoying this graphic novel series and would recommend it for anyone that enjoys graphic novels or The Walking Dead. On goodreads I gave this volume a 5 out of 5 stars, I can’t wait to see what else happens.

One thought on “The Walking Dead, Volume 2: Miles Behind Us – Robert Kirkman, Chalie Adlard and Cliff Rathburn”