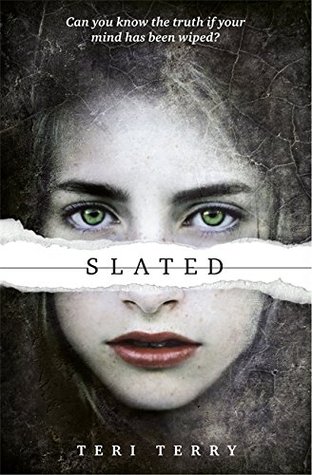 I have a shameful admission; I have had this book for nearly two years on my bookshelves and only picked it up before Christmas. I was arranging my holiday TBR and this popped out at me and as soon as I read the blurb I knew I wanted to read it. I started it on the plane and it wasn’t long before I finished it, this book was great.

Slated is centred on the story of Kyla, who has spent most of her life, or at least what she can remember in a hospital. Her memory has been slated, a programme that wipes the mind of terrorists in a modern day England. Teenagers under the age of 18 are slated if they are involved in crimes, meaning their memory is wiped and they have to learn the basics all over again; walking, talking, eating and more. Kyla has spent the longest time at the hospital compared to other patients until finally she is adopted by a family, she is nervous to leave the hospital as it has been her life for so long. When the day finally comes she makes her way out the door and starts her journey to a new home.

I found this book very interesting for many reasons, however as with most future dystopian novels there is always a deep fear that the main plot could happen at some point in the future. If you think about wiping people’s minds immediately it seems horrific but what if you could wipe people’s minds and give them a second chance at life? It’s a strange idea but one that could be possible with technological advances and one that scarily could have advantages along with many disadvantages.

Other areas of the novel were interesting as the setting is suffering from terrorism in their own country with a background coalition government that is in turmoil. Obviously this governmental situation has happened in the UK and a scary prospect is that this was the switch to a troubled life of terrorism in the UK.

Following Kyla as she went home and learned about the objects in the house and her new surroundings was interesting to read. At sixteen years old it was unusual to come across a character that didn’t know what a cat was and more. I enjoyed watching Kyla grow in herself and in her new life however I was hooked at the prospect that her past memories were breaking down their wall of silence.

I really liked Kyla’s character as she was strong and kick-ass, a trait I love in female characters. However I was a little uncertain about Ben, a fellow slated who Kyla meets at school and a support group. I hate using the word boring but he was a little distant and confusing for some of the plot, even a tad mysterious yet I wanted to know more about him and the more I read the less I found out.

This book is part of a series and I have to say I am very intrigued to find out more about Kyla’s dad who doesn’t play a big part in the plot yet with every section he is in leaves a mysterious and strange presence. His job is not mentioned and yet I can’t help but feel he is part of some secret service, I really hope that in the next novel there is more about him.

I definitely want to continue this series and will be picking up the second book as soon as I can. I can’t believe I left it gathering dust on my bookshelf for so long. Despite this book being over 400 pages it was easy to read and quick to get through with a fast paced plot. I gave it a 5 out of 5 stars on goodreads and would definitely recommend it, although I am quite late to the reading party so if anyone hasn’t already read it head this way.