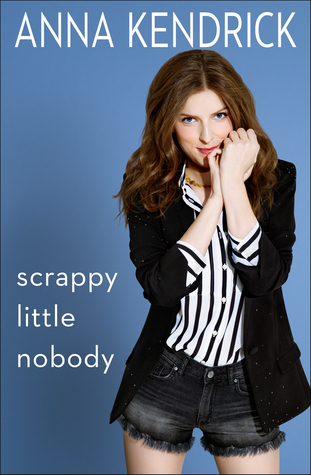 Not knowing a lot about Anna Kendrick I was interested to read this book and expand my knowledge on her. She seems like an actress that has just appeared over the past few years and now every movie poster I see Anna Kendrick is in it either as a main character or a small part. She has worked her way into the acting world and really made a name for herself.

Scrappy Little Nobody tells Anna’s story from how she became interested in acting right up to some of her experiences on set. Picking parts of her life to share with readers this book was hilarious, honest and so much more. Anna came across humble, professional and human as she lays bare some of her most intimate moments of her life from her first boyfriend to moving to California as a teenager. She is hard working and deserves every bit of her career that we see so prominently on our screens today.

Although this book doesn’t chronicle every single detail of Anna’s life I felt it gave an all-round view of her life, family and personality. The further into the book, the more detailed her descriptions become as she humorously tells the reader ‘we’re friends now so’ and divulges more information. I couldn’t help but relate to some of her situations and feelings especially those when she was a teenager or her relationships. She passes on some great life lessons and shows how she learned from her experiences in life and her acting profession. Reading this felt like having a conversation with a friend and not reading about an actress I have never met before and have only seen in another character’s body. However her tone is so conversational and easy to follow making the book difficult to set down from time to time. Anna keeps the reader engaged as she recounts times from her childhood up to some milestone moments such as attending the Oscars, working with famous actors and actresses and even flying on a private jet with Ben Affleck.

I loved how scattered throughout the pages were personal photographs of times she felt were important because they gave an extra visual insight into how she was feeling at that exact moment. Parts of this memoir really made me laugh and her personality came through in the writing clearly. I have seen Anna in a few interviews and she seemed identical on paper as she is on TV, honest and grounded.

I really related with her when she talked about living alone and doing the dishes, it was refreshing to know a celebrity suffers from the mundane chores I hate too. I was also intrigued by the section where she mentions how she would go to an award show and then return to her flat that she shared with her roommates. She had starred in a few notable movies by then and was still in shared accommodation which really highlights how stardom doesn’t just happen instantly, it takes a lot of work and years of effort to get to a point when you can live independently and gain work on a regular basis.

As I mentioned at the start I didn’t know a lot about Anna Kendrick until I read this book but I have a new found appreciation for her. I really hope she writes again because I enjoyed her writing style and relaxed, humorous tone. I gave Scrappy Little Nobody a 5 out of 5 stars on Goodreads and would definitely recommend it whether you are a fan or not.